We are now at almost the halfway point of our 3 1/2 months in S.E. Asia and we have spent most of our time in cities; Bangkok, Kuala Lumpur, Singapore, George Town, and Ubud, Bali which technically isn’t a city but it sure felt like it!!! Our favorite to date is definitely Bangkok, the first Asian city we travelled to six years ago and it still has that special place in our heart.

We spent the first five days of our time in S.E. Asia in Bangkok doing none of the “must sees” and a whole lot of what we wanted to do at our own pace, clearly one of the biggest joys of slow travel. The house sit we had planned for our arrival had been cancelled a couple of weeks prior due to an illness in the home owners family so when we arrived in Bangkok after thirty-six hours of travel, not including the twelve hours we jumped ahead, we were rather grateful to have five days free. We decided to take advantage of knowing that we would be back for another ten days house sitting in June and do exactly what we wanted while getting over our jet lag. On our next go round we will see the sites but this time it was all about R&R and so this is what we did….

To those of you who know us well this won’t be a surprise, we did a lot of eating, mostly street food and at little curbside restaurants and it was awesome, a fabulous combination of delicious and cheap!!!

We also did the obligatory Bangkok shopping, in this case at the MBK Center which is probably Bangkok’s most legendary shopping mall. There are eight floors packed with 2,000 shops that sell everything from clothing, fashion accessories, handbags, leather products and luggage to furniture, mobile phones, electric appliances, cameras, stationery and DVDs. It opened in 1986 and the MBK Center is a whirlwind of activity, especially on weekends, when half of Bangkok converges to shop for bargains. It’s not as upmarket or stylish as the neighbouring Siam Discovery, Siam Centre and the glitzy Siam Paragon, but it offers a mind-boggling range of goods spread over 89,000 square metres and is considerably less expensive. We weren’t shopping for anything major but bits and pieces that we needed such as a cheapie waterproof watch, a couple of lunghis and minor electronic stuff but it’s so huge that wandering around is half the fun!

After a day’s shopping nothing made Jeremy happier than time spent poolside at our hotel the IBIS Riverside, and considering its riverside location a bargain at $50, sipping on some amazing Thai beer…decisions decisions, Chang or Singha? It’s a tough life but for the next few days that was about as big a decision that was made, well that and whether to have dim sum or pad Thai for dinner. Bangkok is a great city for people watching as it’s a major hub for onward S.E. Asia travel so between the local culture and travelers from around the globe there’s always something interesting going on…although at times it seemed it was mostly Chinese tourists taking selfies! Not to mention it was a really nice way to deal with 38 degree temperatures, as S.E. Asia is suffering from an epic heat wave!

The Chao Praya river, the River of Kings as King Rama I named it, is the lifeblood of Bangkok around 50,000 people still use its ferries each day. Slow barges bearing cargo coast upstream, kids play in the brown water and wooden shacks still teeter over the water.We spent another afternoon on the local water taxi, the 21 km Chao Phraya River Express Boat (which cost all of about $1) and rode it from the first to the last stop then turned around and came back. It was a most relaxing way to spend a very hot Bangkok afternoon just watching the world go by…

We braved the heat once again for lunch in Bangkok’s Chinatown which is a popular tourist attraction and a food mecca that many explore for the vibrant streetside cuisine. During the day it’s busy as hordes of shoppers descend upon this 1 km strip to buy food at the markets, trade gold, or visit one of the Chinese temples.

Last but not least there was the afternoon spent at the Caturday Cat Cafe that was beyond exciting for one of us….guess who? Hint, she has a souvenir bag 😻

After five days we were on to Kuala Lumpur for a long weekend but before that here are some parting shots of Bangkok. 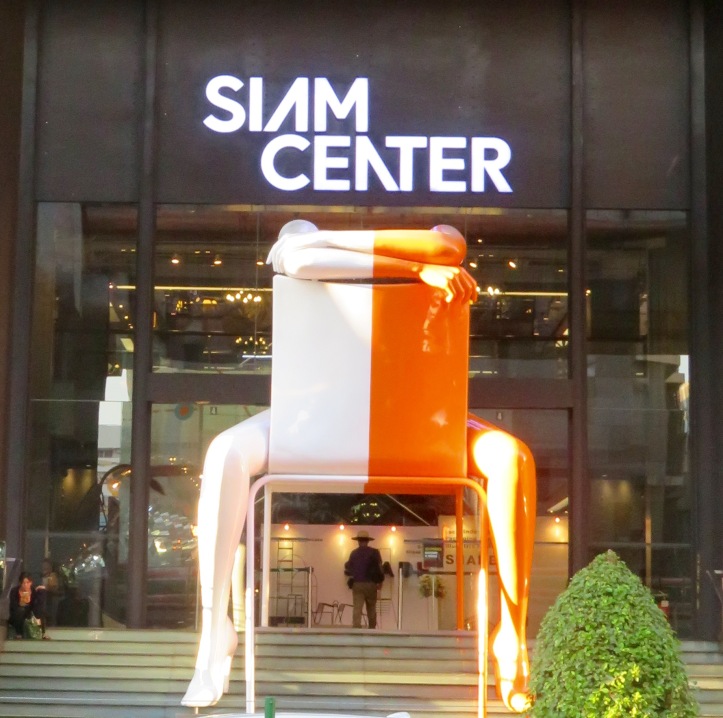